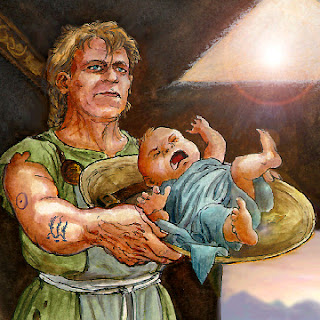 
Since then, we updated and expanded the game for iPhone and iPad, and licensed it for Android and Mac and Windows (on Steam). And GOG made the original version available for download. To celebrate its birthday, the game is 50% off on the iOS App Store for a limited time!

In 18 years, we haven’t seen anything like KoDP, so we decided to make another: Six Ages. It’s currently feature complete and being tested, for release in 2018. Making another game of this scope is a risk for an indie studio, and not many games last 18 years. But we hope we can approach KoDP’s sales (over 175000 on all platforms).
Posted by David Dunham at 10:44 No comments:

I don’t think that it’s a secret that King of Dragon Pass is a hard game. Version 2.0 tried to prevent death spirals, but only goes so far. And there are plenty of ways your decisions can cause you to lose. (Almost always decisions plural…)

Although we have only had metrics in the game since version 2.2 (and only for iOS), a quick look at them bears out the idea that it isn’t easy to win.

For example, of complete games, only 18% are won. Though only 17% of games are played to completion. Presumably a lot of players are restarting rather than play to a grim end. Looking at the overall picture, of games begun, only about 3% end in victory. (I haven’t checked Short vs Long games — presumably Long is played by more experienced players.)

Anecdotally, the game may be hard, but you can learn to master it. Some people complain that 2.0 is easier than the original (which I believe to be true). I think the statistics agree that the game can be mastered, because 11% of long game victories are on the Hard level. You definitely have to know what you’re doing to win playing at Hard.

Interestingly, almost as many people win at Hard as the middle difficulty, as the graph shows.

There’s not a lot we can do with this data, years after the game was designed. But it’s something to think about as we consider difficulty level for Six Ages, our next game.

And if you have won King of Dragon Pass, congratulations! It wasn’t easy.
Posted by David Dunham at 07:20 1 comment: