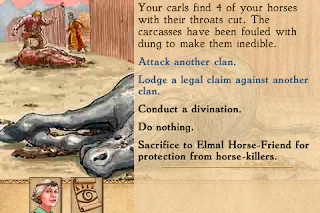 We occasionally get queries about doing King of Dragon Pass for devices that don’t run iOS. (OK, for Android.) At the risk of beating a dead horse, I’ll repeat: one project at a time.

Remember, our resources are limited. So we’re focusing on the most common devices (iPhones, iPods touch, and iPads) with the most appropriate ecosystem* (i.e. a store that allows large downloads, and which is available in our traditionally important markets like Finland).

The iOS marketplace also has the advantage that potential players can get a device without a contract — this has been a problem until very recently with devices such as Android tablets, for example. (Actually, I’m not sure any viable contract-free devices can actually be bought, though some are announced with plausible shipping dates. As for phones, in the USA at least all are sold with contracts.)

Finally, bear in mind that we had to make development decisions some time ago. If we were starting today, we might make different decisions. But changing target platforms today (even to support iPad resolution) would mean a delay in releasing the game.

Once King of Dragon Pass ships on iOS, we can think about whether it makes sense to do additional versions.

To summarize: we can only do one project at a time. We want to deliver our game to our fans. At least you can buy a good device to run King of Dragon Pass without incurring a debt to a phone company. And unless you can travel back in time, the decision was made a while ago.

* The Amazon Appstore for Android may actually become the most promising way to sell Android apps, but an 8-click install (surely they mean “tap?”) seems like a barrier.

P.S. Note that KoDP artwork is currently at the worst JPEG compression, to get the smallest possible file size, so that copying over USB to a device is faster. (In other words, the final game will look better than the screen shot above.)
Posted by David Dunham at 20:45 No comments:

We’re in the middle of adding new content to the game, and one of the scenes Elise Bowditch created involved a new treasure. I’d been debating a few others, so I figured it was easiest to add them in a batch.