KoDP on the web: 50 Years of Text Games / Storylets with Casting

Aaron Reed’s 50 Years of Text Games has now covered King of Dragon Pass, which I strongly recommend reading: the game used techniques that we’re still very much exploring and discussing now, including elements we might now refer to as storylets with casting (that is, storylets that assign characters to particular roles). Well worth a look if you’re interested in the structure, code, or writing process of that game, or storylet games in general.

First, Aaron did a very well researched look at King of Dragon Pass. If you’re at all interested in how we made the game (and how our effort at selling it was received), check it out.

Second, Emily’s categorization seems pretty accurate. Our scenes (a term we used because of their similarity to scenes in a play) would now be considered storylets, and they’re chock full of assignable roles. In many cases, that role is a clan (a neighbor, a rival, an ally, etc.). It can also be a character.

Often the role is a requirement for the scene to be run. The scene condition is in square brackets on the second line of this script, the actual assignment is on line 4.

text: Two children have been pretending to be the god Orlanth and Aroka, the blue dragon. Somehow, their play has gone beyond pretend, and magic is gathering, almost as if they were on a heroquest.

[ProDragonewt Priority] The children may learn draconic wisdom from this experience. [1]

[Trickster AND ProDragonewtOnRing] Good one, <p>! [1]

This is a fairly typical script. The scene is richer if there’s a named leader who can be involved, and in general, we favor choosing leaders who are on the clan ring. Players have typically had an opportunity to learn a bit about their personality (as well as have invested in them as a representative of the clan). The advisor is curious to know about the summoned dragon, and another character offers a rejoinder. 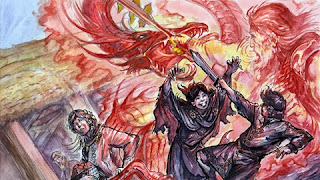 (This scene was created by Lysander Xen as part of our contest, so it’s technically not part of the version Aaron was describing. The illustration is by Jan Pospíšil.)
Note that KoDP’s spiritual successor, Six Ages, also makes use of storylets. A blog post goes into more detail. But pretty much it’s the technique we pioneered in 1997.
Posted by David Dunham at 17:25 1 comment: