As most of you probably know, King of Dragon Pass is set in the world of Glorantha. Specifically, in Dragon Pass.

Greg Stafford had been detailing the myth-based setting for about 30 years when we came out with the original version of the game, and he has continued to add detail since then.

The rich detail of Glorantha allowed us to create a richly detailed game, but we tried to keep players from getting too overwhelmed by the setting. When strange foreigners show up from Tarsh, Ralios or Prax, they can be treated simply as strange foreigners.

But what if you as a player want to know more about Tarsh, Ralios or Prax? There really hasn’t been a great way to do so. There soon will be. 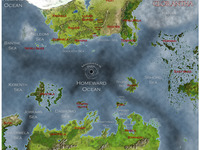 Moon Design has labored over The Guide to Glorantha, a very comprehensive work on the entire world, not just Dragon Pass (where most published works as well as the computer game were set). They are currently in the process of soliciting help making the book even better. The economics of book publishing are quite different from software publishing, so they need early orders so they can get better rates at the printer. Better rates mean they can do things like use more interior color, or commission additional artwork. They are even adding additional detail should funding reach certain levels (although wisely separating this into a companion product).

Since Dragon Pass is pivotal in Gloranthan history, you will learn more about it than presented in King of Dragon Pass. But Dragon Pass is only about one pixel on the map above (roughly in the center of the northern continent), and there’s a whole magical world that’s just as compelling.

Kickstarter supporters get immediate access to a text-only version. I’ve only had the chance to get a few pages in, but the quality is so high that I can recommend this to anyone interested in Glorantha. Help out Moon Design now, and you will help make The Guide to Glorantha even better!
Posted by David Dunham at 16:50 5 comments: