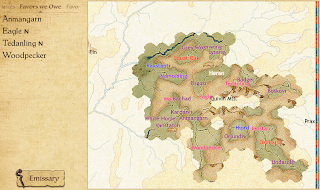 Your clan is not alone in colonizing Dragon Pass. There are a couple dozen other clans, and you have complex and dynamic relationships with each of them.

In addition, there are groups that are treated as clans for convenience, such as the Horse-Spawn, Humakti, or Trolls. The most important factor for groups is usually attitude.

The map shows clan names in colors ranging from most friendly (allies are blue) to least (feuding clans are red). But no color really captures the complexity of how another clan considers yours.

Allied: Is there a mutual alliance?

Attitude: Does the clan think of you positively or negatively?

Captives: Do you have any of their clan members captive?

Favors: Do they owe you a favor? Or, do you owe them one? (Or many; the number goes up and down as obligations are taken on or repaid.) Favors cancel out, so you can’t both owe and be owed.

Feud: Are you in a state of feud? This is basically a declared war.

Proximity: Is the clan a neighbor, or a neighbor of a neighbor? (Rarely this may change.)

Raids: Clans track the number of raids won or lost (including how many consecutive wins or losses), as well as the number you have made without them counter-raiding.

Slights: Grave offenses are remembered for years, even by otherwise friendly clans.

Trade: Is there an ongoing trade route?

Tribute: How much we pay them, or what they pay us.

One important factor is not specific to any one clan.

Kingship: How well our clan is considered suitable for leading others. This is your reputation among the other clans as a whole.

Within the clan, the major factions are the carls and warriors.

Farmer Morale: How the farmers think they are being treated, especially relative to the warriors.

Mood: The overall attitude of the clan.

Weaponthane Morale: How the weaponthanes think they are being treated, especially relative to the carls.

Clans form into tribes. Within your own tribe, clans track how fairly they think you have treated them (especially if yours is the royal clan). Actions of the king may also stir up royal jealousy. There’s also an overall tribal mood tracked for your tribe.

Attitude: Does the tribe think of your tribe positively or negatively?

During play, other relationships might be tracked, such as who you sold a treasure to. This depends on the story.

Keeping Them All Straight

This is obviously a lot to track, and the game does it because the Orlanthi do it. Knowing who you can trust and who you need vengeance on is critical!

But as a player, you’re not expected to worry about every detail. The map or clan filters can give you a quick summary (so you can demand tribute from a clan you are not allied to). And the user interface makes sure you can’t call for a favor from a clan that doesn’t owe you one).

More importantly, your advisors will tell you, either in one of the management screens, or an interactive scene. Be sure to consult them!

And you can also refer to the clan saga, which records interactions with others.

It’s your relationship with the other clans that will ultimately determine whether you can forge a tribe, and then unify the tribes into a kingdom.
Posted by David Dunham at 15:08 4 comments: