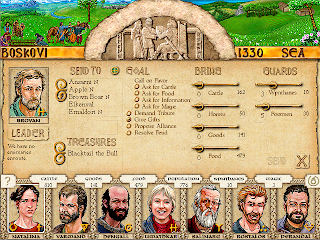 King of Dragon Pass has 19 dialogs (the original had 18, but I decided to split out building fortifications, rather than crowd the War screen). Most of these are pretty straightforward, but I was a bit concerned about the Emissary dialog. It’s pretty packed at 640 x 480, how would it work at 480 x 320 pixels? Especially when user interface elements need to be larger for iPhone. The desktop version could get away with packing the radio buttons 13 pixels apart, because you can hit that fairly easily with a mouse. But fingertips need much bigger targets — the iOS Human Interface Guidelines suggests 44 pixels is ideal. And I’ve found that sliders need to be bigger than they were, in order to have any chance at precise manipulation. 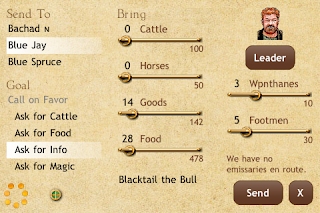 Still, it works pretty well. Keep in mind that the artwork isn’t necessarily final. But by putting the goals into a scrolling list, it works.

This dialog is actually an example of King of Dragon Pass’s complexity, by the way. There’s actually a lot of validation going on to make sure players don’t inadvertently do something dumb, like try to end a feud when there isn’t one, or send an emissary to give gifts without actually bringing anything along.
Posted by David Dunham at 15:40