I was going through the files and ran into some work sketches, which we usually didn’t save. So I can show a bit of our process for creating art.

King of Dragon Pass had three separate art styles (plus interface art), so there wasn’t a single process. This is the basics of how we worked with Stefano Gaudiano to create artwork relating to the present (as opposed to the Otherworld or history).

A scene’s writer (usually Robin Laws) would come up with basic art direction. I (David Dunham) might expand on it, and pass it off to Stefano as Art Director.


R257: A prosperously-attired female carl from the Prosperous Clan (R90) comes to tell us of an attack on her cattle by a fearsome creature called a walktapus. A walktapus is a humanoid creature with an octopus for a head; its skin is mottled and wrinkly like an octopus, but it walks on land. The walktapus has attacked a typical shaggy cow and has its tentacles wrapped around the beast, while carls from this other clan look on in horror, too scared to fight it. 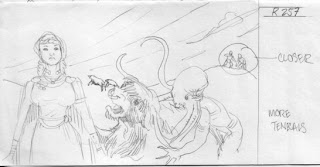 Stefano would get someone to make a loose thumbnail sketch in pencil. (These varied in size; the ones I found were 3 to a standard sheet of paper.) This served to make sure the writers had communicated to the artists, and as a quick way to iterate the design. Elise Bowditch and I reviewed all the thumbnails with Stefano. Sometimes there were small changes (to bring out important elements of the scene, make sure that there was room for text, or emphasize something interesting the artists had come up with). Unfortunately, I don’t know who did this thumbnail. 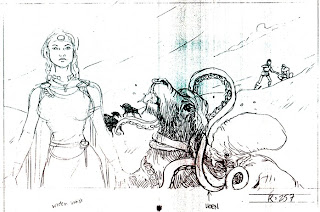 Once the thumbnail was approved, Stefano assigned it to an artist to create full-sized (9 x 5 1/8 inch) pencils. We’d get these by fax, since there usually wasn’t much discussion at this point, and we could usually give feedback by fax or verbally. Again, I don’t know who did the pencils for R257. 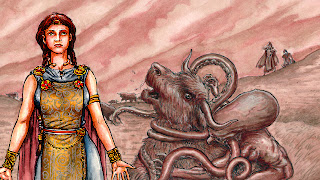 When the pencils were approved, Stefano inked them, then gave them to a colorist (Mike Christian and Brian Sendelbach did most of the coloring). Note that this scene is in flashback style, where the event occurred in the recent past.

Stefano would then do any additional work (such as adding the embroidery on the woman’s overdress). He scanned these images and sometimes made color adjustments or small edits with Photoshop.
Posted by David Dunham at 19:00