King of Dragon Pass is a pretty big game — over 400 crisis management activities, 75 individual clan leaders, 500 hand-drawn color illustrations, 28 musical compositions. Or you can look at how many words of text are in the game: about 462,000.

But those numbers don’t really have much to do with converting the original game to iOS (the operating system of iPhone, iPod touch, and iPad). The assets can be converted to the small screen with Photoshop batch actions.

The game has something like 30-40 screens or dialogs (not counting help screens). All have to be redone. Many need new layout or simplification, and sliders and buttons have to be hooked up.
We also need to handle the UI for OSL functions like ChooseClan, which lets you pick a clan in the middle of an interactive scene. Here’s a quick look at where we stand so far: 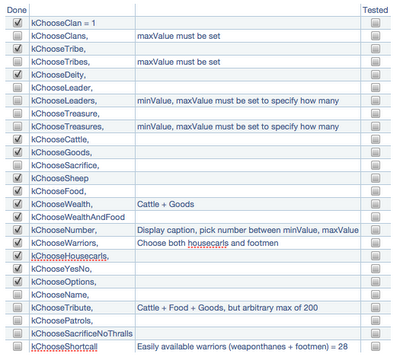 Some of these are relatively rare (if I recall correctly kChooseName is used in only two scenes), but they all need to be reimplemented, and tested.
Posted by David Dunham at 22:20