As I mentioned earlier, King of Dragon Pass has a pretty wide range of interactivity during a scene. There are almost two dozen ways a script can ask the user for input. All of them are now implemented (though not exhaustively tested). The last was ChooseName, which is actually used in more than two scenes becaue there’s more than one route to a tribe. Here’s a typical one: 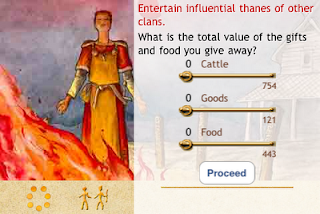 Sliders are used in many of these functions. Here’s what ChooseWealthAndFood looks like in the game. They work pretty well on the small screen (at least for me!), and there’s generally space to show them.

There’s still more scene interaction to implement, but this is mostly running other types of interactivity from within a scene: heroquest, raid, exploration.

A note on prerelease graphics: not only is the art not final (the sliders don’t have the correct transparency), but the scene art intentionally has the highest JPEG compression, so the game loads onto a device more quickly.
Posted by David Dunham at 23:01