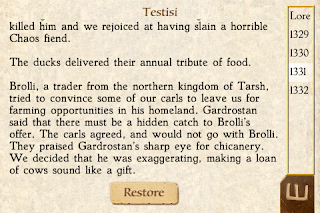 Other games have dealt with the management issue by having a limited number of slots. It’s possible I’ll keep only the last 10 years (or whatever), but I don’t think there’s much need to worry about it. Saved games are only about 80K, plus the saga. A 100 year game is fairly long, but 8 MB is only the size of a song or two. Let me know (comments here, or on Twitter or Facebook) what your longest game was.
Posted by David Dunham at 18:45