One of my goals for version 2 was to simplify the game where practical. One of the areas players suggested was livestock. In fact, one suggestion was simply to have “livestock” — no cattle, horses, pigs, or sheep.

That seemed too extreme. Horses are a useful resource in their own right because they’re required to equip weaponthanes. They also help bring out differences in your opponents (the Horse-Spawn will capture horses in preference to other loot). And there are several events that deal with the value of horses.

Pigs and sheep have events too, but they’re a bit less important in the economic model: sheep can produce goods, and pigs exploit wildlands. But there really aren’t many interesting decisions involving them (which is one reason the original game didn’t clutter the interface with an option to trade them).

Cattle is the basic unit of wealth. A King of Dragon Pass game without cattle would be like, well, it wouldn’t be much of a game! 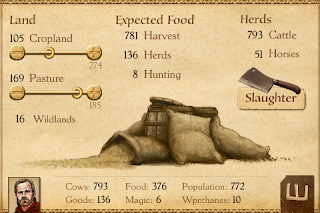 So King of Dragon Pass now presents only two types of livestock: horses and cattle. Cattle are a proxy for sheep and pigs. Nominally you’ll have twice as many sheep and twice as many pigs as you do cows (this is subject to available land). Herd magic will work as always, increasing productivity of the specific animal type.

You’ll note that crop types (barley, wheat, and rye) are also gone. They all had slightly different behaviors (e.g. rye had a more reliable output, so it was worth planting when a bad harvest was expected), but crop decisions weren’t terribly interesting, and probably not very meaningful. So they’re gone too.
Posted by David Dunham at 09:34