Hmm, about a month since the last one, so let’s summarize how things are going: the game is probably feature complete in terms of code.

Before you get too excited: there are a number of known bugs (some serious enough that you could argue that the feature isn’t really complete). And the game is not content-complete. We want to add some more interactive scenes. And a manual! 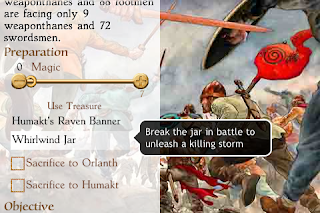 However, the tutorial is now in. Some of the edge cases (like a list of usable treasures in battle screens) are implemented. The economic model is simplified: sheep and pigs are abstracted, and barley, wheat, and rye are gone. And thanks to ShareKit, Twitter and Facebook integration are in.

What’s next? Obviously, fixing known bugs! But also getting the new events in the game. We can’t really do much testing until they’re added, because new events break saved games.

But other than some new content, I believe game and UI design are complete. Which is a nice milestone.
Posted by David Dunham at 12:56