One thing that pleases me is that almost everyone who plays King of Dragon Pass likes it. If I recall correctly, only two people took us up on our money-back guarantee for the boxed copy. (One said he was a Christian and objected to the magic, which seemed odd given how we made an effort to promote the magical land of Glorantha.)

The relative percent is about the same for the iOS version. There have been a total of 6. Refunds are handled through Apple, but I know one person simply couldn’t get the game to work on their iPod touch. 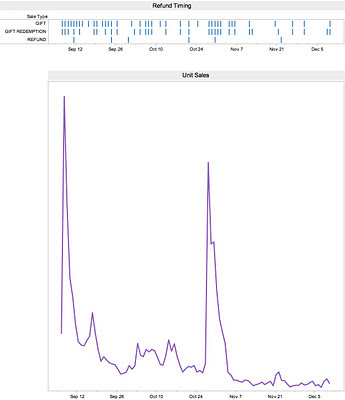 One thing I was curious about was whether our sale lured people in who didn’t like the game. This chart shows that there’s no particular correlation.

The chart also includes the number of gift purchases and redemptions. The numbers aren’t the same — either people are waiting to send out the gift, or people forget to enter it into iTunes or the App Store.

(“Gift This App” appears in a popup menu in the App Store, if you know someone who has an iPhone, iPod touch, or iPad and needs a Christmas present.)