As I’ve mentioned before, King of Dragon Pass is big in Finland (right now in the App Store it’s the top selling Role Playing game and top grossing Strategy game). Finland has remained our number three market (after the far more populous USA and UK).

One change since last month is that Germany is now #6 and Singapore is now #10. The number are all close, but since this is total sales, this may be statistically significant.

The map makes it real obvious that we have very few sales in Africa or Mongolia (not surprising), but also none in Brazil (which does seem odd to me, since there is an App Store).

One item of interest is that sales in different regions don’t move in lockstep. The chart below shows currencies, not countries, so that data is easier to read. In most regions, you can see revenue jump at launch and when we had a birthday sale. But Norway instead had one huge day around 18 September, almost certainly due to a review. And in the second week of October, sales declined in the US (and countries where Apple doesn’t offer local currency sales), while they increased in Europe (at least the Euro-using countries). And the sales spike in late November (which I believe was related to the news about our Universal build) didn’t affect our big markets outside the US. 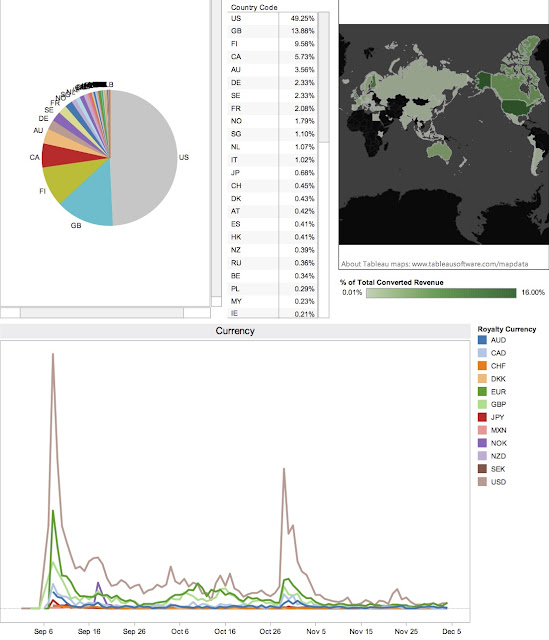