I’ve seen a few questions about the named leaders, so I’ll amplify a bit on what’s in the manual.

By the way, named leaders are considered nobles (thanes), and are counted as such in the Clan screen.

Each leader is rated in seven skills. These are actually numbers, but rather than report them as 3.3 or 5.12, they’re categorized 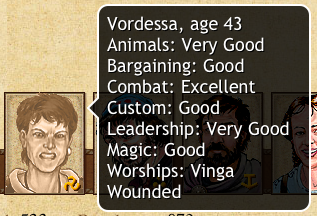 In the normal course of events, leaders gradually improve, until age 50. Elders may lose their Combat edge as they get older. (Once in a while characters can lose — or gain — skill in other ways.)

So what are those skills good for?

The quality of the advice someone gives depends on their skills. For example, Vordessa (with Very Good in Animals) can probably give reasonable advice about situations involving cattle health. But someone with a Renowned skill will probably have additional insights. The game favors the best advice, so depending on the situation, Vordessa will more often be giving Combat advice (since it’s Excellent) rather than Animal-related advice.

Leaders are sometimes explicitly tested in their skills. For example, the “Uralda’s Blessing” heroquest is hard because the quester must have a good enough Combat skill to survive the biting things. Or an interactive scene may let you pick who fights a duel or acts as an emissary. Depending on the situation, the game may only let you choose from characters who are likely to succeed. For example, if you won’t succeed unless you have a good bargainer, the “pick leader” dialog will only show characters above a certain level. (What skill is tested is not always obvious, and in fact more than one skill may be important, so you might want to sort the list several ways before picking.)

Leaders are also tested when they act as the clan’s agent. When you pick a response, somebody actually has to perform (or lead) the action. For example, this OSL code

Response 5: “We will go with you, but your clan will owe us a favor.”
{
… # Calculate clan relationship bonuses
test Bargaining vs. Bargaining d5 + 1 + n, bonus: b

means that the leader with the best Bargaining skill makes the test on behalf of the clan. (The second “Bargaining” indicates that certain treasures or magic come into play.)

So the skills are quite important. You want leaders on the ring who can give you good values in each of the seven skills.

On the other hand, you also want seven different religions represented on the ring. This matches Orlanth’s first ring, and thus gives magical benefit. There are also times when a leader’s religion gives you additional options, like in this OSL code

So picking a clan ring is a tradeoff.

Finally, no discussion of clan leaders should leave out their personalities. Everyone is an individual, with an aptitude for poetry, hatred of elves, or a solitary streak. This will color their advice (as they can’t resist from promoting their agenda), or drive their actions. Check out any statements a leader makes when you tap them in the Reorganize dialog, or watch for trends in their advice.
Posted by David Dunham at 20:14