It’s unlikely that the game will directly support this layout. Sure, 88 more pixels would be nice, but King of Dragon Pass is a landscape game, and extra width isn’t as useful in most cases as extra height would be (most scrolling is vertical). The original art was at a 4 x 3 aspect ratio, and already doesn’t always nicely fit the 3 x 2 iPhone. 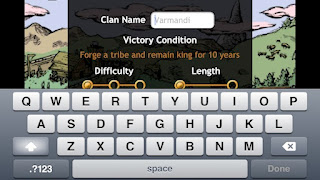 Also, unlike the situation on iPad (where until the 3rd generation, running at 2x had pixelly text), the game works as well as always. You just get 44 black pixels on each side, letterboxing. We don’t have an iPhone 5 yet but running in the Simulator, it looks fine. And you’ll even be able to use the full screen for keyboard input.

* Purists may note that the iPhone 5 has a 640 x 1136 pixel display. Technically this is true, but from a design standpoint, it works better to think of 320 x 568 pixels, with the possibility of fine detail.
Posted by David Dunham at 11:32