King of Dragon Pass Grows Up


The game celebrates its first birthday on the iOS App Store this week, on 7 September. We thought it was time it grew up… 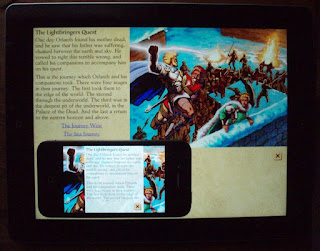 …from 480 x 320 pixels to 1024 x 768. After longer than we expected, King of Dragon Pass is now a Universal app, and fully supports iPad as well as iPhone and iPod touch. It took two additional UI artists, and we had to rework each of the 49 screens, but it was worth it. You use an iPad slightly differently than an iPhone or a computer (even a laptop), and it really feels like reading an interactive, illustrated book.

The game does support the Retina Display on both iPhone and iPad, though most artwork looks just fine at standard resolution so that’s what we used. And we didn’t want to add another 500 MB of art (an estimate how big the 436 event illustrations would be with 4 times as many pixels, for both iPad and iPhone screens).

So the iPad illustrations are the same resolution used in the original game (upscaling inevitably introduces distortion, even if it’s barely perceptible). This left enough room for a reasonably sized column of text. You can see both the art and the accompanying story at the same time, and in most interactive scenes, you don’t need to scroll. And there’s enough space that we can show the info that was hidden behind the graphic on iPhone, and add a Saga button. Again, this really seems like the perfect platform for this game. I can’t imagine playing it on my 30 inch display.

Since the iPad UI is different, we also had to make a new version of the tutorial (most notably because there’s a single Sacred Time screen on iPad), and the manual.

We know a lot of people have been waiting a long time for this version. And we didn’t want them to have to pay a second time. So we made the game a Universal build — it adapts to the device you’re playing on. And we made it an update, rather than a new title, so that it would be free to existing players. 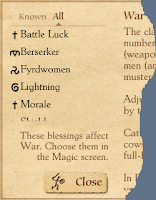 The downside is that you need to download the assets for the device you don’t own. So to make sure there was something for iPhone owners, we added a new illustrated encounter. We also followed up on a suggestion to show deity icons in the lists of blessings, which help identify them. And there were the inevitable bug fixes.

(And, since all reviews and ratings reset with a new version, consider going to the App Store and rating the game.)
Posted by David Dunham at 15:45