Many people have been wondering how repeatable the game really is. If there are only 500 scenes, what happens when you play for a week?

It’s certainly true that the same basic situations are going to recur. But we took a number of steps to help things feel fresh when they do:

No scene will randomly repeat for at least five game years.

And by then, it’s likely the context will be different. Is Dorasa still the tribal queen? Have you patched up a feud? Did you finally get fed up with your Trickster and outlaw him? Can you still afford to pay off a request for wergild? The same situation could easily have totally different ramifications. (This is one reason KoDP isn’t a pure storytelling game, but has a relationship and economic model.) And of course, in a different game, the context will certainly be different.

Most scenes have five responses. We tried to make all of them reasonable choices, so you can explore alternatives. (Even bad alternatives might end up with amusing consequences, and a single choice shouldn’t doom you.) And very often a response will test the abilities of a clan leader, and thus have either a successful or unsuccessful outcome. 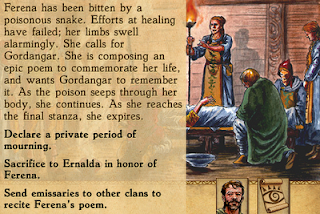 A number of scenes have internal variation. For example, in one scene a ring member dies tragically. The specific ring member is random. And there are four possible deaths.

On top of that, flavor text is often randomized. Here’s some of what you see if that ring member was slain by a Chaos horror:

text: The ring gathers in sorrow around <c>, who was struck down by a weird Chaos monster <d6:that had the body of a giant snail and the head of a dragon/that looked like a deer but had the face of a troll/that had the body of a scorpion and a human head/that was hiding at the bottom of a pond/that was living inside one of our cows/that was lurking among the trees at the edge of our tula>.

Finally, if a scene logically can’t repeat within one game, it won’t.
So you could think of King of Dragon Pass as composed of a number of storytelling motifs, which it repeats in endless variation.
Posted by David Dunham at 15:17