We released King of Dragon Pass for iOS on 8 September, and it’s gotten a very warm welcome. Of 136 star ratings in the App Store, 128 are 5-star ratings. And some really great App Store reviews. Here’s what might be my favorite (from the UK store):

It's impossible to describe the emotional tug you feel when an old and trusted advisor, who you've watched grow from a young upstart, dies of old age.
Or when an exploration team disappears into the wilds, never to be heard from again.
Or when a cursed clansman, shunned by his peers, sacrifices himself to stop a raid.
This game will never leave my iPhone. That's the only accolade possible.

It’s also hard to describe how all this makes us feel — but it’s definitely a positive emotion! 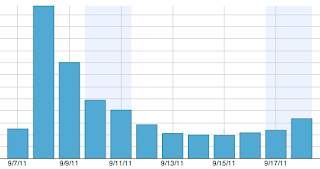 While we don’t release specific figures, I do want to talk about sales as well. I have to say I’m astonished by the shape of our unit sales graph. The left half is what I expected — a launch splash, followed by a gradual decline as other games push ours out of the limelight. But then sales began to climb again! For several days in a row, so it’s not just a fluke.

While we did get a number of favorable reviews on a number of web sites (which we’re slowly collecting on our Reviews page), their timing really didn’t seem to correlate to sales. So my conclusion is that it’s due to word of mouth — after you play the game long enough to give it a recommendation, you do just that. Thank you!

As an independent developer with no marketing budget, word of mouth is critically important to the success of the game. We’ve tried to make that easy (with Twitter and Facebook buttons in the app), but ultimately it’s your credibility on the line when you recommend us. We really appreciate that.

And, I have to ask you to do it again. We just released an update (2.0.1). The way the App Store works, each version has its own ratings. So King of Dragon Pass will drop to zero 5-star ratings. If you can, please go back to the App Store and rate it again. If you already wrote a review, I don’t think it makes sense to do that again. But if not, those help too!

Thanks again for buying the game, and for letting people know about it.
Posted by David Dunham at 18:36