Finland was always a big market for King of Dragon Pass, thanks in part to a glowing review in the January 2000 issue of Pelit, which was then the premier game magazine. The review was 2 2/3 pages, and gave the game a rating of 94/100. We were then picked up by the game store Fantasiapelit, which kept the game in stock for years (they got our last boxed copies). 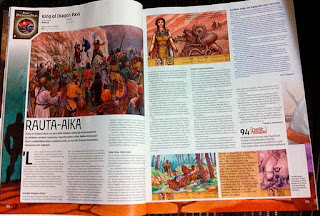 This time around, I got help from Olli Sinerma and Jani Lintunen. (I contacted Olli to see if GameHouse would publish the game, but they decided not to. Olli believed in the game, and put me in contact with Jani.) As it happened, Olli writes for Pelit, and was playing board games with the editor-in-chief of a new magazine, Pelaaja. So it was easy to make sure the magazines were aware of the game. And, we once again got good press coverage.

Pelit didn’t give us quite as many pages, but again we got a 94/100 rating. You can see what it looks like above. 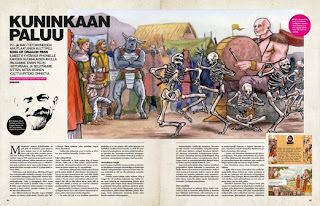 Pelaaja picked up on the Finnish connection, and interviewed me, as well as Olli and Jani. They had never reviewed an iOS game before, but ended devoting 4 pages to King of Dragon Pass. (I will be posting the raw interview text later.) 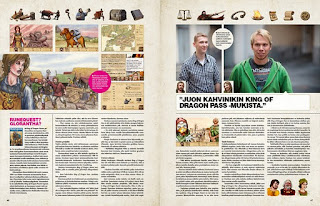 Once again, the Finns seemed to love the game. As I write this, it’s still the number one selling game in both the Role Playing and Strategy genres. It’s still the number 4 grossing game, and was at one point the top-grossing app (not just game). Despite being a country of around 6 million, Finland has been our third largest market. Thank you!
Posted by David Dunham at 19:15