Although there are still a few known issues, and none of the iPad-sized assets are final yet, all of the screens have been converted to take advantage of the 1024 x 768 pixel screen. (There are 49 iPad-specific .xib files, which specify layout.) 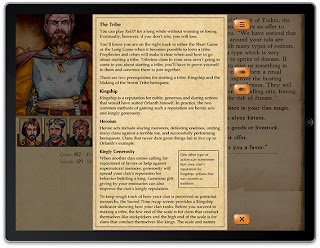 As I’d hoped, there don’t seem to be any problems with the 480 x 320 pixel version, so I can finally be confident that we can do a Universal version — one build that runs on either iPad or iPhone. Right now it’s about 242 MB (again, we don’t have final artwork so this could change before release).

Although the game art isn’t available at full-screen, we are taking advantage of the iPad screen to showcase that art by not covering it with text. In addition, scrolling choices is much less frequent. Advisors are always visible. And it’s now possible to read the manual from within an interactive scene (as per the screen shot above).

The Universal build has not been through any sort of QA, but I hope to start testing soon.
Posted by David Dunham at 18:28