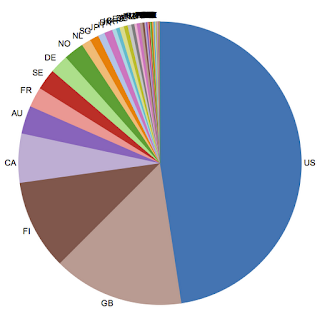 I thought it might be interesting to share where and when sales of King of Dragon Pass happened. Since the game is only available in English, you’d expect sales to be best in the USA and the UK. And that’s what Apple’s reports show. Almost 48% of revenue is from the US, and 15% from the UK. But more surprising (at least to someone who doesn’t know the game’s history): over 10% of sales are from Finland (a nation of under 6 million people). We can thank the magazines Pelit and Pelaaja for letting the Finns know that the game was out. And of course the players who have kept it in the charts (currently it is #1 in both Strategy and Role Playing categories, both in units and revenue).

A bit more surprising to me is that the game is so popular in France (about 2.3% of revenue). Or that Singapore is the biggest market in Asia. 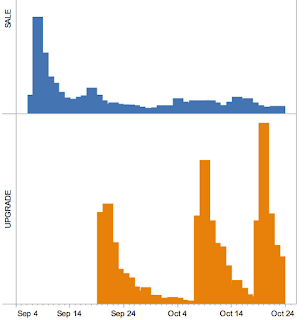 Games are a hit-driven market, so you would expect to see an early sales spike as the release and our PR hit. We were hoping that the tail of the chart wouldn’t get too low, and while it’s a bit too early to be sure, that looks possible.

The orange graph shows what happens when we release an update.

Although there are some drawbacks to selling in the App Store (Apple doesn’t allow time-limited trials, which would probably be the best form of marketing), in general it’s proven a good way for a small developer to reach customers. In the first six weeks, we sold more copies for iOS than boxed copies of the Windows/Mac version. That’s lifetime sales. We’ll probably hit double by the end of next month. Some of the sales are to people who enjoyed the original game, but obviously many are playing for the first time.
Posted by David Dunham at 19:05