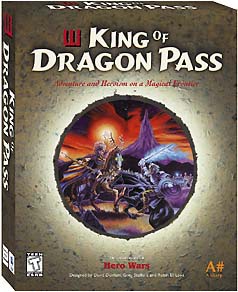 The original version of King of Dragon Pass was released to the world on 29 October 1999. On Saturday, it turns twelve years old! That means it can finally play itself, since the version in the iOS App Store is rated 12+.

Version 2.0 was already significantly improved from the desktop version. Now we’re making it bigger than ever: we’re creating a build that will take advantage of the iPad screen. With about 40 screens to adapt, this will take a while, and we don’t have a release date.

I’ll be discussing the iPad build in the future, but I want to remind people that the original artwork was scanned at 640 × 480 pixels, which is much smaller than the 768 × 1024 pixel iPad screen. However, we will use the larger (compared to the 480 × 320 pixel iPhone) artwork, and take advantage of the extra screen real estate to reduce scrolling and make items easier to target.